Disclosure: When you purchase a service or a product through our links, we sometimes earn a commission. Read More..

Bluehost and HostGator are two of the largest hosting brand in the world. 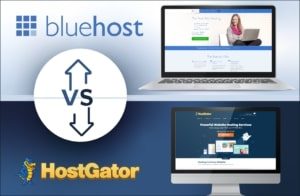 Funny enough, they are both owned by the same company – Endurance International (EIG).

Since they are so big, they have more money to invest in their servers (uptime and speed), support, features and so on.

HostGator and Bluehost both offer all kinds of services, from simple domain names to shared hosting (what we’ll be reviewing here), cloud hosting, virtual private servers (VPS) and even dedicated servers.

By using a third-party tool like Pingdom to measure performance between Bluehost shared and HostGator shared we managed to gather some important data, such as speed and uptime.

So Bluehost vs HostGator – which one is actually better? Let’s find out…

1. Which One is More Reliable (Uptime)? Bluehost…

This comparison is based on 12 months worth of data.

However, the truth is that we’ve been monitoring them for over three years now.

But some years ago, their tech infrastructure had a major overhaul. And the results since have been like a night and day difference.

For a long time, Bluehost has somehow been able to deliver borderline flawless uptime of over 99.99%. We’ve only seen a few outages, and those never lasted longer than a few moments.

We’ve reviewed over 30+ hosting companies to date, which have come out with an industry average benchmark of 99.94%. That’s pretty good, but Bluehost’s performance has blown it out of the water.

Check out the month-to-month breakdown for yourself:

Bluehost average uptime over the period of 12 months is <99.99% with only 44 minutes of downtime and 25 outages.

HostGator’s average uptime over the period of 12 months is <99.98% with 2 hours of downtime and 29 outages.

2. Which One is Faster? Bluehost…

Page speed is second only to uptime.

(After all, it’s tough to complain about slow loading times if your site is completely offline.)

But sluggish page speed can affect you in all sorts of ways, from driving visitors away from your site, to completely sabotaging sales.

Some years ago, if you’d asked us about the page speed for both Bluehost and HostGator, you would have gotten a confused look. Or a profane F-word.

The reason being: It wasn’t great. Like, really bad actually. Bottom-of-the-rankings bad.

Bluehost, for instance, showed a great performance with an average page speed of 368ms in the last 12 months.

That is a head above the rest of the competition. 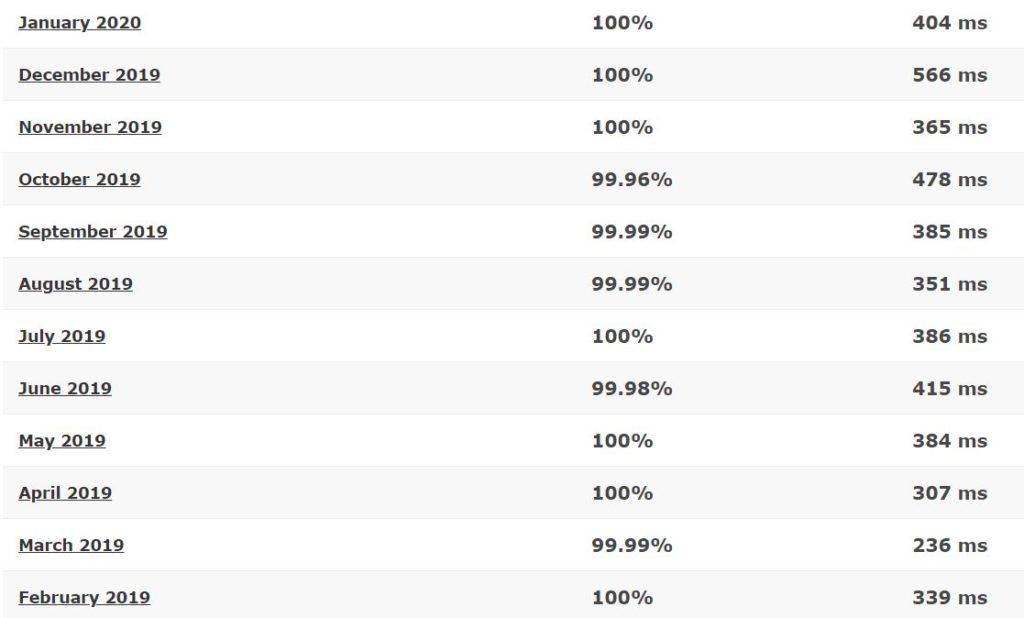 HostGator’s page speeds have been disappointing.

Over the last 12 months, they’ve only been able to muster an average of 1385ms, meaning it takes more than 1 second to load a web page.

The page speed race is barely a competition in this case because this HostGator’s average is more than three times slower than Bluehost’s. 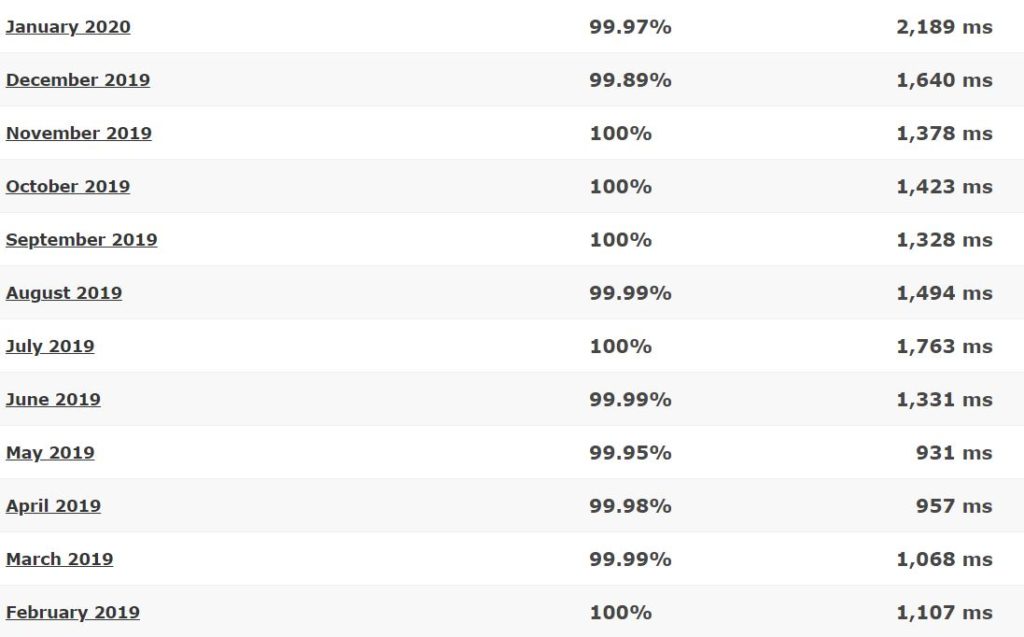 3. Which One Has Cheaper Long-Term Plan? Both

Both Bluehost and HostGator have similar plans and pricing tiers.

But let’s begin with Bluehost, first. 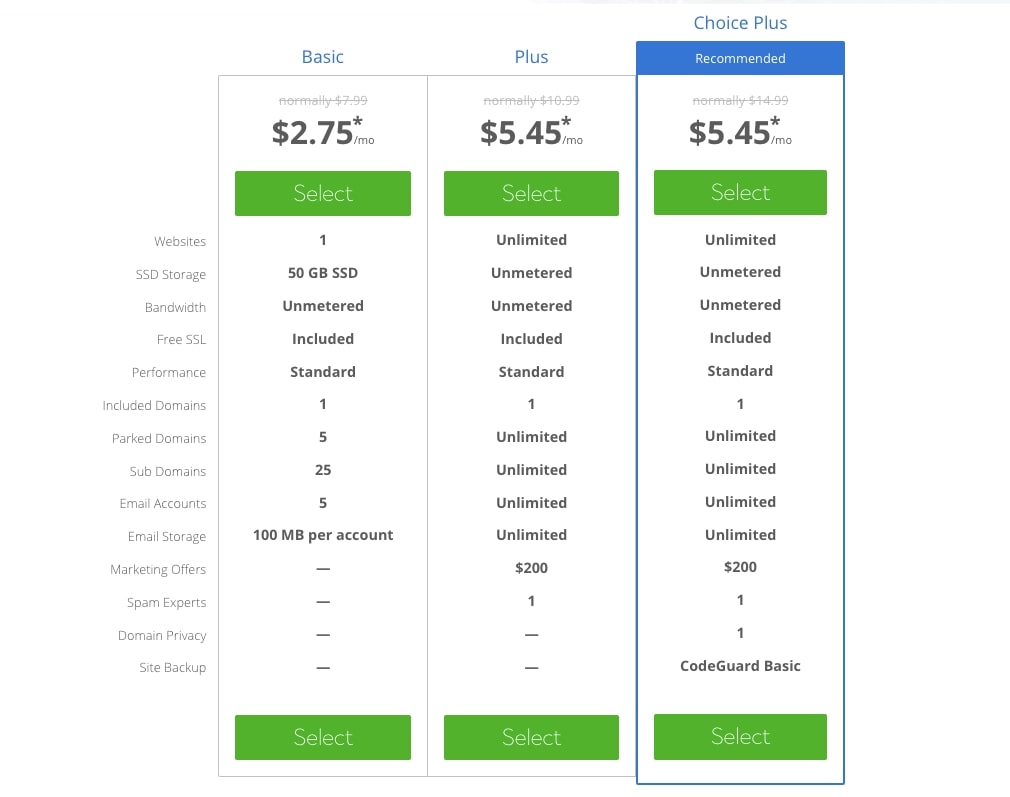 (Bluehost also has an assortment of VPS and dedicated servers to buy if you need something with a little more horsepower.)

There is a catch to these low prices, however.

You’re going to have to sign up for a full three-year term to take advantage. This is both good and bad news, though.

The bad news is that you better be sure you like their service before prepaying for three years. Thankfully, they provide a 30-day money-back guarantee, with some restrictions. Add-on services, like domain names, aren’t included. And they’ll deduct $15.99 for the cost of the said domain name.

The good news is that you’re locking in this discounted rate.

See, most other hosting companies do the same industry-wide pricing tricks. They reel you in with incredibly low prices for the first year, only to jack the rates on you (sometimes two or three times) in subsequent years.

But in this case, prepaying actually works in your favor.

You can pay for Bluehost with all major debit or credit cards, plus PayPal.

Unfortunately, this pricing does not include free site migrations. So you’ll have to pay extra if transferring from another hosting provider.

Here’s how their plans and pricing breakdown: 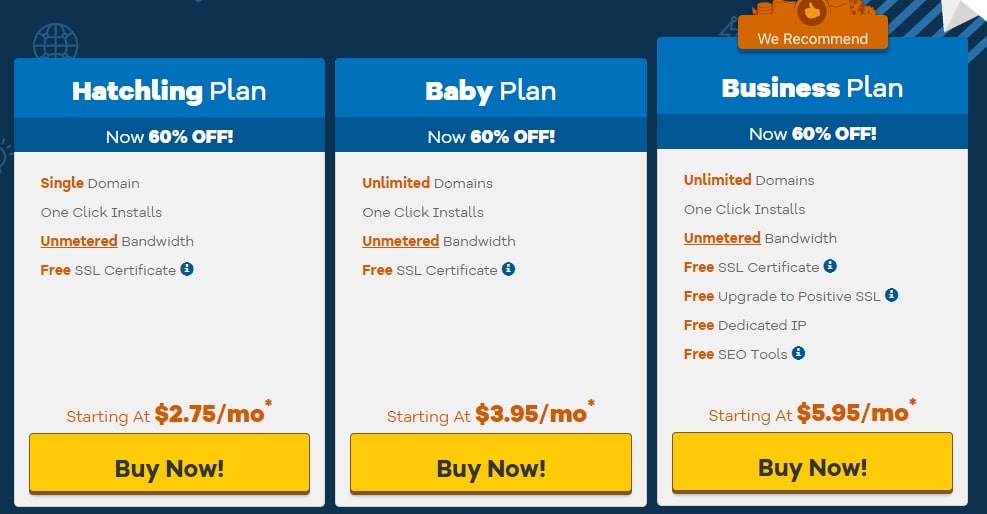 HostGator pricing is similar to Bluehost, where you’ll pay for a three-year term to take advantage of those low rates.

Their money-back guarantee is two weeks longer than Bluehost’s at 45 days, but there are quite a few exceptions.

Basically, refunds only apply to shared or VPS hosting. No dedicated servers, or admin fees. And you have to pay through debit, credit, PayPal, or cash (yes, cash) to be eligible. Money orders, checks, and bank transfers won’t get refunds.

Unfortunately, those renewal price hikes are in full effect with HostGator.

After your initial plan expires, HostGator will raise rates (although, the full amount depends on the plan you end up with). 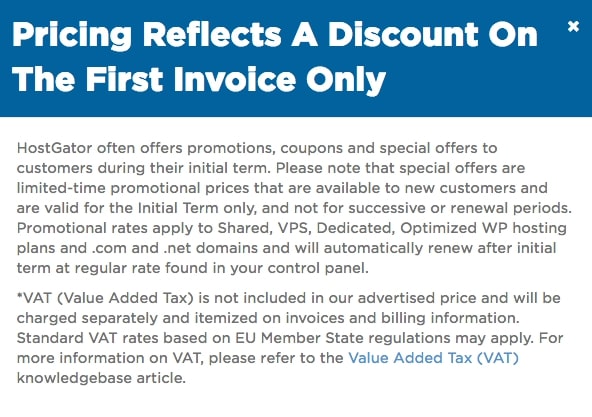 They’re often lightning quick on live chat sessions now. Although, we found that their support reps were sometimes out of their depth when tested with more technical questions.

Interestingly, you can hop over to their YouTube channel to probably solve most of the common issues you’d run into.

HostGator’s customer support has also been very good as of late. It took a little while to get connected with a live chat rep (~16 minutes), but once we did, they seemed very friendly and knew what they were talking about.

A positive experience in both cases! You can no longer go wrong with these hosting giants.

6. Which One Is More “Feature Rich”? HostGator…

Let’s not beat around the bush.

Bluehost and HostGator have some deep pockets these days.

But they’ve been splashing that cashback on their customers by throwing in all kinds of nice little perks with very little limitations.

For example, Bluehost has a whole slew of spam-focused tools, including SpamAssassin, Spam Experts, and Spam Hammer, to help you prevent webspam from infecting your site. (Not to mention, free SSL certificates.)

Bluehost will even work well with CloudFlare to provide extra attention to hacks and hotlinks. They’ll even allow you to password-protect directories and add two-factor authentication to your logins.

They’re also eCommerce-friendly. You can head over to the MOJO Marketplace to set up a fully-fledged online store.

You can use Bluehost’s one-click WordPress installation, or advanced users will be happy to get their hands on cPanel access. 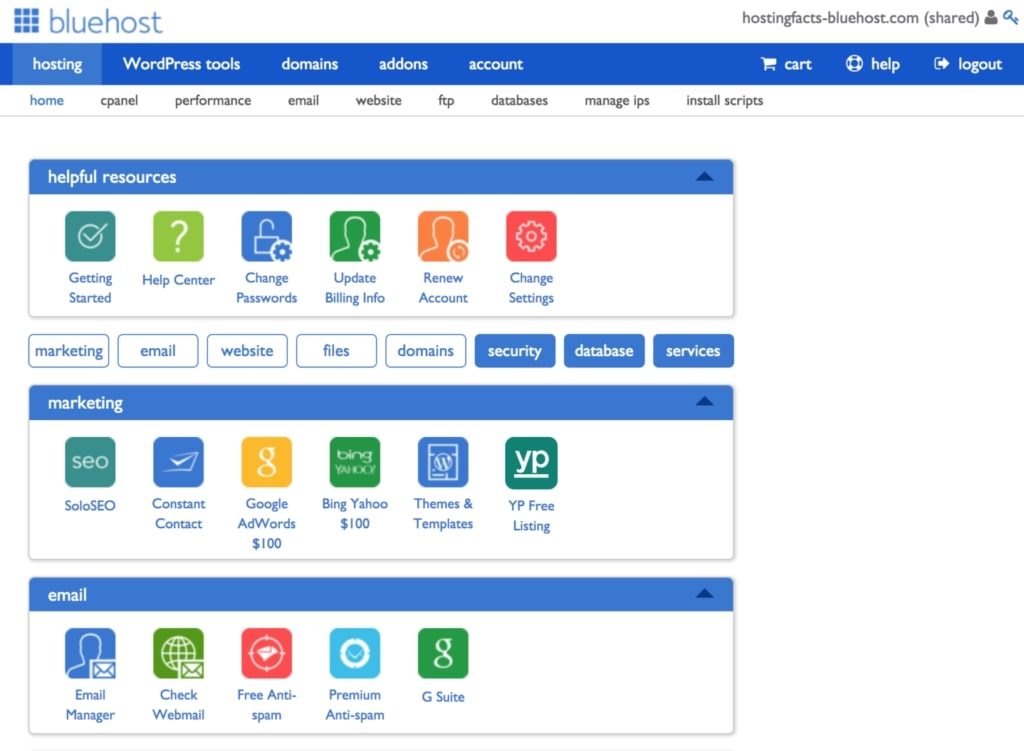 Almost all web hosts throw this in for free — including HostGator.

We just had another web host do a site migration for us, and it took… ~20 minutes tops. We were able to do it instantly on the live chat even.

So if you’re moving an existing site, keep this in mind. Or, take a closer look at HostGator (you just have to signup with 30 days after purchasing a plan). They’ll move everything from the domain to the entire website, and even MYSQL databases.

HostGator also throws in a ton of extras, including similar malware protection, SSL certificates, and even daily backups!

HostGator also has the added bonus of a built-in website builder, complete with both eCommerce functionality and mobile-responsive design templates.

And you can get up to $200 in free advertising credits for new users ($100 to each Google AdWords and Bing).

All of these ‘extras’ make HostGator a great choice for both types of people. Beginners starting from scratch will like these ad credits and drag-and-drop website builder, while customers with existing websites will like the free site, domain, and database transfers.

It’s a solid option for both.

They’re both excellent options for both newbies and power users trying to decide where to host their online empire.

So, how should you choose?

If pressed, we’d give the slight edge to Bluehost. Here’s why:

You could make the case for HostGator in a number of areas. Especially in the ‘extra’ features, like the free site migrations, backups, and website builder.

But overall, Bluehost dominates in the ‘top-three’ of uptime, speed, and price. Nearly besting each position out of over 30+ hosting companies we’ve reviewed to date.

We only accept user-reviews that give value to our visitors. Not all reviews will be published. If you wish your review to be approved, we recommend you to write valid, unique and helpful reviews – either positive or negative. Thanks for your support!

Important: Web host companies cannot pay to delete or change the reviews. But we provide them an opportunity to answer or comment on any review, to keep the process honest and fair for both sides.

0 user reviews for Bluehost vs HostGator – Which One Is “Actually” Better?
Submit review

Earnings disclosure: In order to get you the cheapest price possible, we’ll earn a commission if you decide to purchase through our links.